When I cut out a picture of the turquoise ocean coast of Western Australia and stapled it to my vision board, I was living on a country road across from a cornfield in Hawkesbury. I was taking care of my two-year-old twins, Tate and Clara, while my nine- and ten-year-old kids were at school. That was ten years ago!

How is it that so much can happen in ten years?

At that time, I had no thoughts of running my own swim school or living in Ottawa, nor did I have any idea how or when we would make it to Australia to visit my sister, Erica, who had just moved there.

What a joy it is to now have finally made it to Australia and to have swam the Rottnest Channel with Erica and our team.

The Rottnest Channel Swim – truly the adventure of a lifetime!

Before the sun rose on the morning of Saturday, February 24th, Erica and I woke, ate our oatmeal and dressed like one would for a Canadian winter in sweatpants, a t-shirt, polar fleece, wind-proof jacket and toque (or, as the Aussie’s call it, a ‘beanie’). Kaere then joined us and we got ready and headed for Hillary’s boat harbour.

The boat pulled up alongside the early morning fishers and we introduced ourselves to Ryan’s crew, Rat and Simmo (Aussie sea-mate names, of course!). As the sun rose, we sped off towards Cottesloe Beach to wait for the start of the race. Just south of the start beach we stopped and the crew hoisted up our Canadian flag! 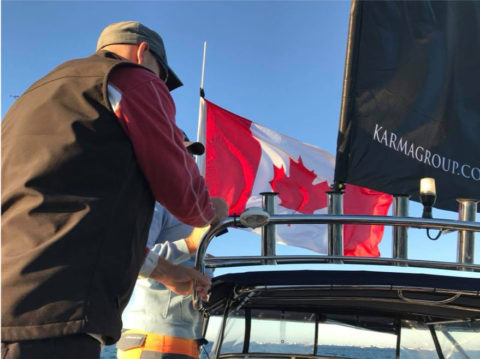 At 7:05am, Em, our first team swimmer in her florescent orange ‘bathers’ (Aussie for swimsuit) ran into the water with a hundred or so other people in the start wave and quickly pulled ahead of the pack. Kim, our amazing kayaker, spotted Em right away and pulled up to paddle beside her. Em is not only an incredible and experienced open water swimmer, she works all summer as a Surf Lifesaver patrolling one of the busiest beaches in Perth. And every second weekend she patrols the metro beaches from the Surf Lifesaving helicopter. The woman is fit!

Meanwhile Back on the Boat…

At 7:25am our skipper, Ryan, spotted, what he thought were, Kim and Em. He brought the boat carefully up alongside and sure enough, it was them!

Next to swim a fifteen-minute leg was Kaere. She jumped in, tagged Em above the water (as per the regulations) and was off.

Something you should know about Kaere is that this was her first Rotto swim ever, even though she has a strong competitive swim background. She has been Erica’s roommate for 4 years and has even crewed for Erica’s previous Rotto swim, but she had never done one herself. I’m so grateful that she stepped in to swim her first with Erica and me.

Thirty minutes into the swim it was my sister’s, Erica, turn to swim. Erica is eight years younger than me and four months pregnant with her first child! So, technically we were a four-and-a-half person team. That morning Erica had a terrible sore throat and the chills from a Canadian cold Clara and I had brought her. Yikes! But she swam her best anyways.

I’m getting a little teary just thinking back on that moment. Just before I jumped in for my leg, I can remember talking to the camera doing a Facebook live video, dedicating the swim to my fantastic swim quad, then jumping off the side of the boat into the surprisingly warm water

I can recall the salt on my lips, then looking underwater at my sister’s form swimming towards me in a confusion of boats, water, bubbles, and waves. Then I was raising my hand out of the water and Erica was giving me a high five tap off. I think she cheered, or maybe it was someone on the boat, and I swam off.

There are moments in life when things seem to slow down, and your heart feels like it is so full it might burst. That moment of jumping in and tagging off with my sister was one of those moments for me. To share such a great moment with her in the middle of the Indian Ocean, doing something we both love, well, what a JOY! What a thrill.

I am so grateful to her, our team, my Aqua Life team back home, and my family for helping make that happen.

In my training for Rotto I did some ocean swimming in Florida, but this was quite different!

First, kayak paddler Kim, who was fantastic, was following the swimmers! It felt like I kept being swept left into the kayak. Maybe it was the current or the waves; I’m really not certain. It took a bit to adjust my stroke, but eventually I did.

Second, there was the swell. What a feeling it is to be picked up by the water from behind, lifted up, rushed forward, and then plunged head-first down the trough of the wave, only to be pulled backward by the next wave and then picked up all over again! It took a few minutes each time to get into the rhythm and figure out how to ride the wave. And there were plenty of salty mouthfuls of water while you tried to figure out when to breath during all of this.

I was in the water when the rest of the team and crew heard on the radio that a large creature had been reported at the 12km mark – 50m or so from where I was swimming!

We were told to standby for confirmation and further instructions. This was the first time a shark had been spotted during a Rotto swim.

A few minutes later, Em jumped in to swim her leg and I was brought up to speed. Em had finished her ten-minute leg and Kaere was getting ready to jump in, but we still hadn’t heard anything. Let’s just say a nervous Kaere made us promise to pull her out ASAP if we spotted anything.

Finally, when we hit the 13.4km mark, the voice of the race director came over the radio and confirmed that a 4m shark had been spotted at the 12km mark and that anyone currently in the 11-13km mark was to immediately pull their swimmers out of the water. We were 400m outside the zone! And so, lucky for us, we got to continue the race.

There are moments in life when things seem to slow down, and your heart feels like it is so full it might burst. That moment of jumping in and tagging off with my sister was one of those moments for me. Click To Tweet

What’s Everyone Pointing at?

During my next leg in the water, I noticed that everyone in our boat and the neighboring competitors’ boats were leaning over the side and pointing to something ahead. Try as I might to see up and over the waves when I turned to breathe, I could not see anything. Since no one motioned or hollered for me to get out, I kept on swimming.

When Em jumped in to tap me out, they showed me incredible pictures of a support boat that sank not 25m in front of where I was swimming. Afterward, we learned that it went down so fast that the skipper didn’t even have time to find his house and car keys before it sank.

For the last 800m of the race, Erica, Em and I jumped in with Kaere to swim to shore. Our boat veered off as per the rules and Kim stayed with us up until the 400m mark and then he, too, had to paddle outside the finish buoys. The water around Rottnest Island was an incredible turquoise in the sandy spots and you could see right to the bottom. It was a great swim in and we ran up the beach, hand in hand, and crossed the finish line in five hours, nineteen minutes and twenty-six seconds, stopping at the beach for a group photo of course!

And The Winners Are…

It was a fast year for the Rottnest Channel Swim. The record for the fastest male solo swim was not only broken, it was the first time ever a solo swimmer swam the channel in under four hours! The soloist was Solomon Wright with a time of 3:59.28.

The results of the team category kept changing as we followed online. When the dust settled, and all the teams that had pulled out reported to the results station, our team, the Three Beavers and a Kiwi, had won first in the Woman’s Team Overall!

It was the icing on the cake of a great adventure. What a day and what a time we’ve had in Australia. What a joy swimming has brought me. I am so grateful for this experience.

Now it’s time to sit down (once I get back to Canada, that is) with a pair of scissors and some magazines and dream of what adventure to staple to my vision board next.

What is your next swim adventure? Where will swimming bring you? Let me know in the comments below.

Stephanie Rainey loves to talk about Learn-to-Swim stuff. She lives in Ottawa, Canada with her four kids, husband and Portuguese water dog, Eva. She loves astanga yoga, meditation and a cool pool on a hot day!

This site uses Akismet to reduce spam. Learn how your comment data is processed.