[Part 1] Drowning Prevention: By the numbers

[Part 1] Drowning Prevention: By the numbers

Numbers aren’t sexy. We know. But what if they could save your life? The stats about drowning can be scary, but when you know them it gives you the power to act against them.

In this two part blog, we give you a rundown of the numbers in the Lifesaving Society’s recently published 2017 Ontario Drowning Report. This is part 1, where we look at the who, when, where and what of drowning. In part 2, we go over the risk factors that can drive up your risk of drowning – AKA the ‘why’.

Consistent with years past, eight out of 10 drowning victims were male. While the Lifesaving Society offers only the data and no suggestions as to why this might be, academics have been speculating over the gendered difference in risk-taking for years. According to many, it’s wired in our biology.

“Women systematically overestimate risk of any type, while men consistently underestimate it. This pattern has been observed regardless of the context.” -Shervin Assari, University of Michigan

Some of the most surprising stats to come out of the report are the ages of most drowning victims. With the hype around keeping our kids safe in the water, you might assume that children are most at risk of drowning. 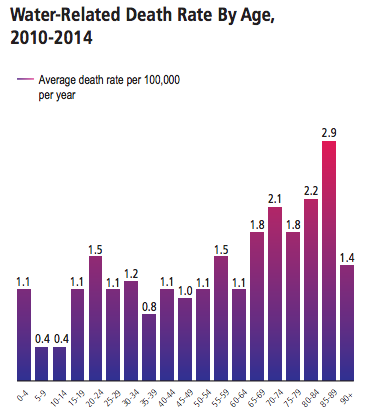 But – no. The highest instance of deaths by drowning was in retirees – anyone over the age of 65. When you consider this, it makes sense – we bring our kids to swim lessons every week, they’re not allowed near the water without supervision AND they’re never left alone in the tub. Yes, that’s right, part

of what drives this number up for the senior population is accidental drownings in the bathtub – 60% of bathtub drownings were people over the age of 65.

After the elderly, it’s obviously young kids who drown most commonly, right? Again, that’s incorrect. The next two age groups with the highest instance of drowning deaths were 55 to 59-year-olds and 20 to 24-year-olds. These stats will make more sense once we review WHY people drown in part 2.

Now, this isn’t to say that you should leave your kids alone around the pool. Or that you should hire a lifeguard to watch over your bathtub. But, these stats serve as food for thought. While it’s understandably many people’s first priority to keep kids safe around the water, adults can drown too. We should work to be vigilant in keeping EVERYONE safe. How great would it be to see these numbers drop dramatically across the board? 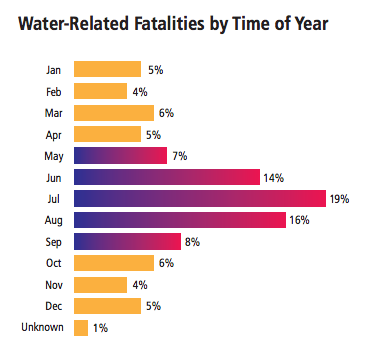 Unsurprisingly, the majority of water related deaths occurred between May and September, the busiest time for activities on the water. There’s a huge spike in July, with 19% of all fatalities for the year occurring then. These numbers make sense – there are few seasonal winter activities that see people go near water. While accidents do happen while snowmobiling or ice fishing, these activities are relatively uncommon and deaths related to them are low.

So we know what time of year contributes most to our drowning risk – does it get more specific, though? According to the Lifesaving Society, 53% of water related deaths occurred on the weekend (which they define as Friday, Saturday and Sunday). Which makes sense, since the weekends are when most people engage in leisure activities like swimming or boating. 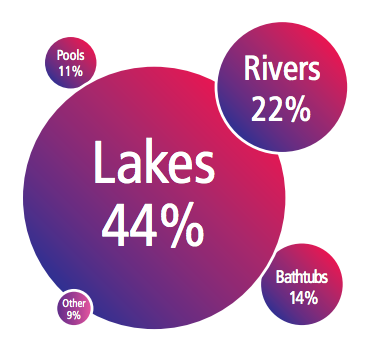 Based on these stats, the most common place for drowning deaths to occur was in lakes, with a whopping 44% overall. The next highest risk location was in rivers or streams, with 22%. Basically, natural bodies of water are where the most incidents occurred.

Private pools accounted for 11% of drowning deaths. The Lifesaving Society highlights that the group most at risk in this setting was children under the age of 5, with 40% of all drowning deaths in kids this age having occurred in backyard pools. This number will become more understandable (but no less sad) when we look at WHY people drown in part 2.

We know who is most at risk, where the most deaths occur and when – but what are people doing most commonly when they die in the water? Overwhelmingly, fatalities occurred when people were engaged in recreational activities, with 62% of deaths.

In 36% of water-related deaths that occurred during a recreational activity, the victim was swimming. This is a staggering number when you consider that it’s twice as high as the next activity on that list: walking, running or playing near the water.

What can we do with these stats? The reason we’re sharing these numbers isn’t to scare you. It’s actually the opposite – knowing the risks and where the most fatalities occur empowers you to prevent similar incidents from happening.

We hope you’ll check out part 2 of this blog to learn more about why people drown.

To learn more and see the research methodologies used to compile this report, check it out here.